Even though there is a multitude of communication theories, and you probably know some already, you should give this one a look. It is easy to grasp and particularly useful for the general understanding of communication, and more so for intercultural communication.

Why do you think messages are so often differently understood than they were originally intended? What if you have four ears, and so does the person you are talking to? Based on this model, there are four facets of each message that is conveyed, and also four facets in the way the message can be received. This helps to understand the potential of misunderstanding, values and perceptions in conversations, the context of conversations, intentions, etc., which play a role in communication.

Communication is a crucial part of human interaction at work. The Four Sides model can help you recognize potential for misunderstanding e.g. when discussing tasks, giving instructions, receiving feedback, etc.

To learn how to use the model in everyday communication, watch the videos and do the exercise below. See also the picture of the model (click to enlarge). Take note that the sides of the quadrate are the same length referring to the fact that all four facets in communication are of same importance, yet each layer of the model can be misunderstood individually.

What effect do you think has whispering on conversations? Which side/ear is addressed?
If someone does not have good language skills, how likely is it for that person to express or receive subtle messages?

2.Draw a quadrate and write on each side what the message and interpretation might be.

4.Think about a way that sentence could have been differently composed with more explicit language, and thus understood like it was intended to be.

5.Apply what you have learned and use it in your daily life, particularly when speaking to people from different cultural backgrounds.

We all speak and use language differently. For instance, in terms of speed, word choice, and loudness, but also due to accents and dialects or fluency in a foreign language. We all have our own voice and style. Interestingly, how a person or a group speaks and uses language, also affects our perception of and even behaviour towards them.

The way we talk and use language can depend on which language we are using. Usually, people are most fluent in their mother tongue. Their grammar is better and vocabulary is richer than in other languages learned later in life. A person’s mother tongue can also affect their use of foreign languages. For instance, the mother tongue’s pronunciation can affect the foreign language pronunciation as well. It is good to remember that few people are professional language users, even in their mother tongue, and appreciate the efforts everyone makes to communicate with one another, whatever the language may be.

When interacting/speak with a person, ask yourself the following questions: Do you (consciously or unconsciously) pay attention to the way they speak? Do you make assumptions about their background? What other associations might come to your mind when hearing the other person speak?

Perceptions based on language can be positive, neutral or negative, just as any other perception or stereotype. Certain accents and simple alterations in the way someone speaks can, mostly unconsciously, trigger prejudice or preconceptions about individuals and groups. The whole world is used to broken English already, and we hear English spoken with different accents all the time. Then again, with smaller languages, like Finnish, people might not be used to hearing ‘broken’ language as most speakers are traditionally native speakers.

It’s normal to have biases and make assumptions. Humans have a need to understand and gain control over uncertain situations. By unconsciously categorizing and making assumptions about other people, we try to make sense of them and the situation in order to use our previous experience to know how we to interact with that person. Accents and unfamiliar language can make it more difficult for us to understand and interpret messages and situations, which can in turn lead to frustration. If that happens often, we might automatically associate accents with frustration and react negatively from the start when someone speaks a bit differently.

Similarly, if we can empathize with the other person, positive emotions and reactions might be more prominent. Have you ever felt uncomfortable and unsure about your accent when you speak in a foreign language? Remember that your international colleague might feel like that very often too.

Food for thought:
It is scientifically proven that ethnocentrism negatively influences the perception of non-native accent speaker’s social ranking, attractiveness and task performance, among other aspects. In order to not let this affect you in working life, become aware of your own ethnocentric tendencies (ethnocentrism = characterized by or based on the attitude that one’s own group is superior).

2. Do you detect any accent bias? What is behind it?

4. Can you recognize what your accent biases are?

Points to consider about language bias

If and when people do not share linguistic and cultural backgrounds, non-verbal communication becomes even more prominent in sending and receiving messages. And yet cultural behaviour can affect non-verbal communication greatly. For instance, is it considered polite to look at a person in the eyes in your culture? What kind of tone of voice do you use when speaking to colleagues or employees? Do you talk to your team facing them or with your back turned to them? All of these examples can be conveyed in different ways, depending the cultural communication preferences.

A large part of our communication is non-verbal. Researchers define non-verbal communication “as the transfer and exchange of messages in any and all modalities that do not involve words.” Aspects like paralanguage, voice, tonality, speaking rhythm and intonation, gestures, mimics, body posture, physical appearance, etc. play a role.

Everybody communicates with body language, and the challenge comes from our interpretation of it. Each of us interpret body language in our own way, usually based on our own experience and knowledge. The knowledge and thus the interpretation are culturally related, context dependent and unconscious. Moreover, few people are consciously aware about their non-verbal communication habits.

You can start by observing your own body language. Try to make sure it matches the message you want to convey. Consider also the context. For instance, is your body language similar when you are talking to your supervisor, colleague, friend or family? Make note of how it might change based on the situation, environment, your feelings, etc.

Physical cues in communication to pay attention to:

An example from a Finnish context:
“We Finns are accustomed to a firm handshake to show our trustworthiness and sincerity. People who have a very light handshake, like a “dead fish” as we say, are interpreted to lack strength of character or to be indifferent to meeting us. In certain other cultures, our firm handshake is a sign of aggressiveness whereas a light handshake is the proper, polite and respectful one.”  – Finnish senior HR consultant

What is considered a good handshake or greeting in your culture? How do you greet people in other countries? Does it match the image you want to give of yourself?

The picture will enlarge by clicking it. 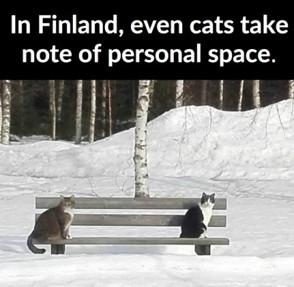 Points to consider about non-verbal communication

You reached the end of the item!